A plan by the new Ontario Progressive Conservative leader would provide less financial relief to low income earners than Liberal Premier Kathleen Wynne’s proposal to hike the minimum wage to 15-dollars an hour. 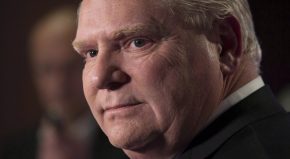 Doug Ford has provided more details of his promise to scrap the provincial income tax for Ontario residents who make the current minimum wage of 14 dollars. Ford claims his tax move would save about 817 dollars a year for a full time minimum wage earner making $28,000.

But analysts at the Canadian Centre for Policy Alternatives say minimum wage workers would be better off with the one dollar hourly increase because most don’t pay income taxes thanks to deductions for child care, dependents and medical expenses.

Economist Sheila Block says the dollar increase is worth $1950 a year before taxes for a 37.5 hour full week. She says you still wind up being about $1100 ahead with the move to 15 dollars an hour, rather than with Ford’s tax credit.