The amount has been confidential until now – but a judge ruled both sides could discuss it at the trial.

He’s charged with drugging and molesting Constand at his home in 2004 – and says the encounter was consensual.

Meanwhile- a topless protester who jumped a barricade and got within a few feet of Bill Cosby –  has been identified as a New Jersey woman who appeared on several episodes of The Cosby Show. 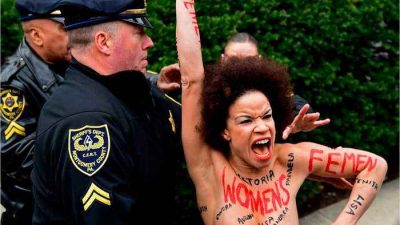 Actress Nicolle Rochelle ran in front of Cosby toward TV cameras – as the comedian walked into the courthouse for the start of his sexual assault retrial.

Written on her body were the names of more than 50 Cosby accusers, along with “Women’s Lives Matter.”

Rochelle was intercepted by sheriff’s deputies and led away in handcuffs. She was later released – and has been charged with disorderly conduct.