NO OTHER POLITICIAN OUTSIDE OF ROB FORD THAT SUPPORTS THE BLACK COMMUNITY MORE THAN ME: DOUG FORD

Doug Ford says a champion of the black community.

“There’s no other politician in this country, no other politician outside of Rob Ford, that support the black community more than I have, and I love ’em and I support ’em and they know that,” explained the new Ontario Progressive Conservative leader when asked why he wouldn’t be participating in a debate next week organized by black community leaders ahead of the June election. 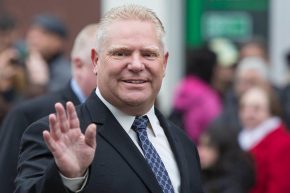 All of the other party leaders have confirmed their participation in the Black Community – Provincial Leaders Debate scheduled for Wednesday.

Ford says he will be travelling in northern Ontario and that time and simply cannot attend.

But he says he will face off with the other party leaders in televised debates before the June 7th election.