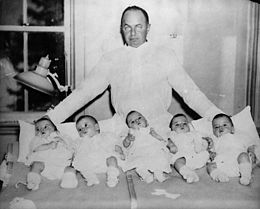 The birth of the Dionne Quintuplets was “an event of national historical significance” – according to the federal government which says the birth and survival of  “five identical, premature and undersized” babies – was an unprecedented event that drew international attention.

The quintuplets remain a source of fascination for some – with one group mounting a year-long campaign to preserve the sisters’ childhood home in North Bay, Ontario – and turn it into a museum.

The campaign succeeded, and the log cabin was successfully relocated to a new site in North Bay in November of last year.

Family spokesman Carlo Tarini says the museum will likely open its doors in July or August.

The story of the northern Ontario sisters was among 12 events, people or places – given the important designation Tuesday.