The Ontario government is on an “unsustainable” fiscal course, according to a new report from the CD Howe Institute.

The report’s authors say spending by the governing Liberals is out of line with their ability to raise revenues. And they say the government should adopt a long-term fiscal policy that requires surpluses, not just balanced budgets.

The analysis also faults the Wynne Liberals for their refusal to allow private sector involvement in recreational cannabis sales once marijuana becomes legal this summer.

The report says more competition between businesses would keep marijuana prices low, making it more likely to be competitive with the existing black market.

Ahead of the June election, Progressive Conservative Leader Doug Ford has come out in favour of opening the recreational marijuana market to some privatization. 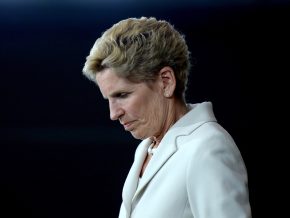 Ford is also promising he can find savings without making any cuts. Premier Kathleen Wynne told Zoomer Radio’s Fight Back with Libby Znaimer, that’s not possible.

“It will mean cuts in teachers and doctors and services that people need, so that’s his remedy to cut taxes and cut those services. We take a very different view of what’s needed in Ontario right now,” explained Wynne.

Wynne says instead, her government is going to make healthcare a priority. She’s announced a plan to expand pharmacare by offering the full cost of prescription drugs to Ontario residents 65 and older starting a year from August.