The estate of the author of  “To Kill a Mockingbird” has filed a suit over an upcoming Broadway adaptation of the novel, arguing that screenwriter Aaron Sorkin’s script wrongly alters small town lawyer Atticus Finch who was played by Gregory Peck in the movie.. 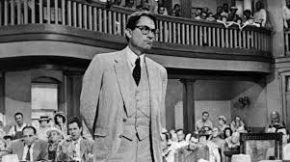 The suit, filed on behalf of Harper Lee, includes a copy of a contract signed by the author and dated about eight months before her death, contends Sorkin’s script violates the agreement by portraying the attorney who represents a black man wrongly accused of rape as someone else in the play.

The suit was filed against the theatre company of New York producer Scott Rudin.  It cites an interview in which Sorkin is quoted as saying the lawyer would evolve from a racist apologist at the start of the show to become “Atticus Finch by the end.”

The play is scheduled to open in New York in December.

ARBITRARY DETENTIONS IN SYRIA CONFLICT MAY BE WAR CRIMES

DIRECTIVE BASED ON 'BUTTERGATE' CLAIMS COULD COST DAIRY FARMERS