A legal process is underway to try and extend the Ontario Progressive Conservative leadership campaign by a week.

Lawyer Jeffrey Radnoff is representing a client named Christopher Arsenault, a PC party member, who claims he has not received a PIN code that would allow him to vote. Radnoff will be in court Friday morning trying to obtain an injunction to extend the voting process.

Candidate Doug Ford has been calling for a week long extension, claiming tens of thousands of PC party members have been shut out of online balloting. 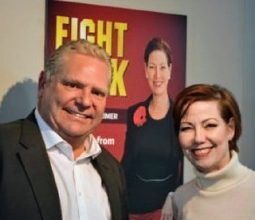 Ford told Zoomer Radio’s Fight Back with Libby Znaimer, if the leader is named this Saturday as planned, there need to be some big changes.

“Win or lose, I’m not going to be happy about the system that they put in place and I’m going to show these people the door and get proper people in there (that) can actually run the executive,” Ford explained.

Ford has been joined by rivals Caroline Mulroney and Tanya Granic Allen to extend the verification and voting periods by one week. But candidate Christine Elliott says she’s working with the system that’s in place.

Registration ended Thursday night at 8pm. Voting continues until noon Friday and barring any last minute interjection by the legal system, the leader will be announced Saturday at a Markham convention.

Should the convention go ahead as planned, listen for ZoomerMedia’s Libby Znaimer with special reports on the next Ontario PC Leader.