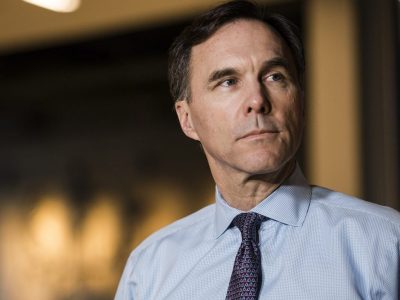 Health and labour groups are calling on Prime Minister Justin Trudeau to remove Finance Minister Bill Morneau from the government’s national pharmacare file – over comments he made about the freshly launched effort to explore the issue.

The heads of three organizations allege that Morneau presupposed the outcome of the study on national pharmacare – by saying he supports an eventual strategy that would preserve existing drug-insurance systems in Canada – rather than tossing them all aside for a new national plan.

Leaders of the Canadian Labour Congress, Canadian Federation of Nurses Unions and Canadian Doctors for Medicare have written to Trudeau about Morneau’s remarks – the morning after he tabled a budget announcing the national pharmacare council.

The organizations say Morneau’s comments not only contradict overwhelming evidence that has shown a national plan is the best way forward – they also threaten to undermine the work of the national pharmacare council before it even begins.

The New Democrats also used the daily question period to attack Morneau – who defended himself by saying he would listen to the findings of the expert council – to make sure all Canadians have access to pharmaceuticals.

The letter’s authors also seized on a remark made by Morneau at Wednesday’s breakfast event – about his past ties to his family-built firm Morneau Shepell -, which he noted is the largest benefits consultancy provider in Canada.