Actor James Dean’s cherry-red jacket from the 1955 film Rebel Without a Cause is going up for auction Saturday in Florida. 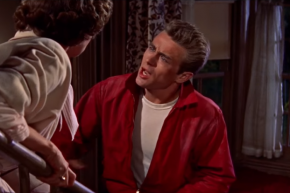 It’s a rare opportunity for fans to pick up an item linked to the actor who died at the age of 24. 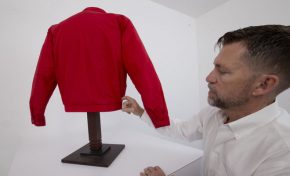 (Rico Baca, auctioneer and co-owner of Palm Beach Modern Auctions, points out features on a jacket worn by actor James Dean in the film “Rebel Without a Cause.” The jacket, privately owned since Dean wore it in the 1955 film, will be publicly auctioned in Florida on March 3. AP)

Palm Beach Modern Auctions co-owner Rico Baca estimates the nylon windbreaker will sell for between $400,000 and $600,000. He calls it as important to pop culture as a dress worn by actress Marilyn Monroe or a glove worn by Michael Jackson.

Dean only starred in three movies and died in a car crash about a month before Rebel Without a Cause premiered.