For the first time since 1998, Canada won’t come home with a gold in women’s hockey. 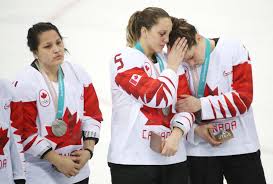 That was decided early this morning in a shoot out with the U.S.

After finishing the game tied 2 – 2 after regulation and overtime, the game went to a shoot out.  On the sixth Canadian shot, Meghan Agosta need to score to keep our gold medal hopes alive.  She was stopped by American goalie Maddie Rooney giving the U-S a 3 – 2 win.

Canada had won four straight golds, losing only in 1998 when women’s hockey made its Olympic debut.

No final had ever been decided by a shootout.