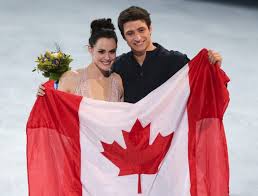 In what was likely their final competitive performance, the pair scored 122.40 points in the free skate for a world-best combined score of 206.07.  Earlier, they helped Canada win gold in the team skate event.

Virtue and Moir offered up a steamy skate to music from “Moulin Rouge” and they were all smiles as they took what will likely be the final bows of their illustrious career.

Virtue and Moir also won gold at the 2010 Vancouver Olympics.