It’s another golden day for Canada at the Winter Olympics in Pyeongchang, South Korea. 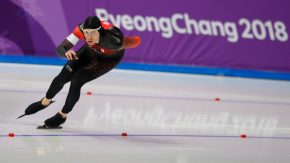 Calgary speedskater Ted-Jen Bloemen has come first in the men’s 10,000 metres in an Olympic-record time of twelve minutes 39.77 seconds

Canada has earned a second Olympic luge medal, finishing with a silver in the team relay at the 2018 Pyeongchang Winter Olympics.

And Meagan Duhamel of Lively, Ontario and Eric Radford of Balmertown, Ontario ended a dry spell for Canada in pairs figure skating, capping their final Olympics with a bronze medal on Day 6 of competition at the Pyeongchang Games. The pair finished third to give Canada its first Olympic pairs medal since Jamie Sale and David Pelletier captured gold in 2002 in Salt Lake City.