Not only is it Valentine’s Day, it’s Hazel McCallion Day in Ontario.

The longtime former Mississauga Mayor is celebrating her 97th birthday today. Though retired from politics, McCallion is still an active member of public life. 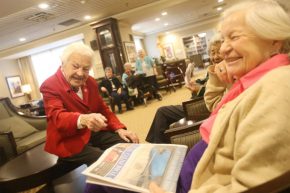 Former Mississauga Mayor Hazel McCallion, left, who, at age 96, is as busy as ever visits residents at The Beechwood retirement home. McCallion, who will turn 97 on Valentine’s Day, advises seniors to view life as a “multitude of stages.” (VINCE TALOTTA / TORONTO STAR)

She is chancellor of Sheridan College, sits on the boards of three companies, was named to the board of the Greater Toronto Airports Authority and has advised Premier Kathleen Wynne on urban issues. Two or three times a week she visits her office at the Ontario Women’s Hockey Association, an organization long championed by the onetime pro who in the 1940s earned $5 a game playing on a Montreal women’s team.

She is sought for appearances and speeches, including an “Ageing Well Revolution” conference last November that required a 21-hour trip to Adelaide, Australia. She shortened the flight home by visiting a friend in the Azores region of Portugal. Last year she was in China.

The idea behind Hazel McCallion Day on February 14th came from a private member’s bill introduced in the Ontario legislature in 2016 and was unanimously approved by MPPs at its third reading before gaining royal assent.