CANADA ENJOYS ANOTHER GOLDEN DAY AT THE SOUTH KOREA OLYMPICS

Canada racked up 3 more medals at the South Korea Winter Olympics on Tuesday – one gold and two bronze. 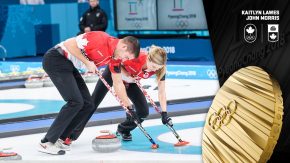 Canada’s John Morris and Kaitlyn Lawes are bringing home the first Olympic gold medal in mixed doubles curling after a 10-3 win over Switzerland.

Short-track speedskater Kim Boutin of Sherbrooke, Quebec won the bronze medal in the women’s 500 metres after a South Korean skater was disqualified.

Canada has 10 medals at the Pyeongchang games to date, for 4th place behind Germany, Netherlands and Norway. The United States is in 5th place with 6 medals.