Politicians of all stripes are paying tribute to Chris Stockwell, a former provincial cabinet minister and House Speaker who has died of cancer at the age of 60. 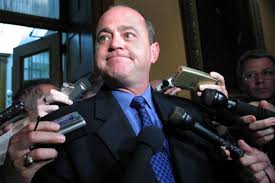 After a stint in Etobicoke municipal politics, Stockwell was elected to Queen’s Park in 1990.

Over more than a decade he served on numerous committees, acted as the Tory critic for a number of portfolios and eventually a cabinet minister.

He was Speaker of the Legislative Assembly for nearly three years.

Vic Fedeli, the interim leader of the Ontario PC’s, tweeted last night that “he was saddened” to learn of Stockwell’s passing.  Premier Kathleen Wynne says Stockwell was a “fiery, passionate person who brought life to the Ontario Legislature.”