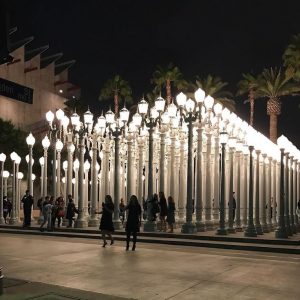 It’s the 10th anniversary of the installation of the 202 vintage street lamps – standing in tight formation at the museum’s Wilshire Boulevard entrance.

The anniversary was celebrated this week with the announcement that all of the more than three hundred incandescent bulbs – have been replaced with LED bulbs.

The change was funded by the Leonardo DiCaprio Foundation – and will mean 90 per cent power savings – and a considerable reduction in  greenhouse gas emissions.

Burden recovered and restored the antique cast-iron lamp posts over a seven year period – and the artifacts represent 17 different designs used by cities in and around Los Angeles.