KIM CATTRALL ANNOUNCES THE DEATH OF 'ONE OF A KIND' BROTHER

Canadian-born actress Kim Cattrall has thanked everyone on social media for their love and support, but is now appealing for privacy after the sudden death of her 55-year-old brother, Christopher Cattrall. 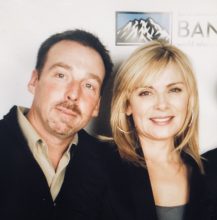 Less than 24 hours after the Sex and the City star took to Instagram to ask for help finding Christopher Cattrall, she posted to Twitter yesterday to announce his “unexpected passing.”

RCMP investigators say Cattrall’s body was found on his rural property in Lacombe, Alberta. He had last been heard from on Tuesday. His death is not being treated as suspicious.

Kim Cattrall, who was born in the U.K. but spent much of her childhood in Canada, had said in an earlier Instagram post that her brother’s keys, cellphone and wallet were left on a table in the house, and his front door was unlocked and his seven dogs were left alone. Police did not confirm those details.

“He’s a one of a kind brother,” Kim Cattrall wrote in her earlier social media post. “Help us bring him home safe.”