There are now three declared candidates in the race for Ontario’s next Progressive Conservative leader. 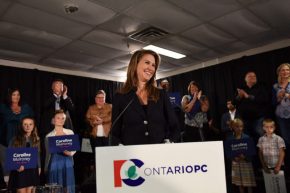 Caroline Mulroney announced her candidacy in a video on twitter Sunday night, saying she is the only one who can provide a government that cares about families and focuses on affordability, economic growth and opportunity.

The 43 year old Harvard-educated Toronto lawyer is the daughter of former Prime Minister Brian Mulroney. She has never held elected office, but had been running as the PC candidate in York-Simcoe prior to Patrick Brown’s resignation as leader amid sexual misconduct allegations on January 25th.

U of T political science professor Nelson Wiseman says despite the upheaval in the party, the PCs will garner much of the attention in the coming month because the “conservatives are going to take a lot of the oxygen in terms of Ontario political coverage because people like horse races.”

Caroline Mulroney received a significant boost in her bid to become the next leader yesterday when potential rival Rod Phillips endorsed her candidacy. The other 2 declared candidates in the race which is decided March 10th are former PC deputy leader and patient ombudsman Christine Elliot and former Toronto city councillor Doug Ford.

Christine Elliot will be a guest on Zoomer Radio’s Fight Back with Libby Znaimer Monday after the noon news.