Wiarton Willie has broken the tie on this Groundhog Day. 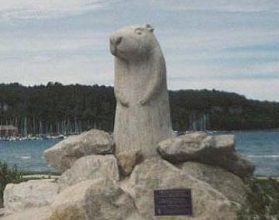 (The famous Wiarton Willie Statue sits in Bluewater Park on William Street in Wiarton. It’s been there since February 3rd, 1996 to commemorate the 40th anniversary of Wiarton Willie prognostications, surrounded by large limestone boulders against the backdrop of scenic Colpoy’s Bay and the cliffs of the Niagara Escarpment.)

“He told me not to sweat it, because he’s been trained very well,” said Wiarton Mayor Janice Jackson before reading the prognostication, “Six more weeks of winter!”

Willie joins his counterpart Punxatawney Phil in Gobbler’s Knob, Pennsylvania in seeing his shadow. He too is predicting another six weeks of winter.

But in Nova Scotia, Shubenacadie Sam did not see his shadow, predicting an early spring for Atlantic Canada, which has had more than its share of bad weather so far this winter.