The decision Wednesday night by members of the PC Party executive kick starts one of the party’s shortest campaigns in recent memory. It also marks the official launch of a leadership race just four months before the provincial election.

March 9th is the deadline for voting, which will take place by secure remote electronic balloting starting March 2nd. Candidates will be allowed to spend up to $750-thousand. The minimum entry fee is $100-thousand.

The rules for the 2018 Ontario PC Leadership Race have been posted on the Ontario PC website. 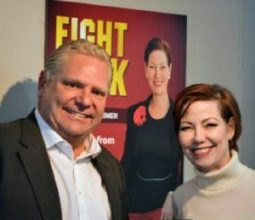 Former Toronto City Councillor Doug Ford is the only declared contender to date. He will be a guest on Zoomer Radio’s Fight Back with Libby Znaimer today after the noon news.

Meantime, a new poll suggests Doug Ford has a strong base, but is unlikely to woo those who are considering voting PC in the June provincial election.

The Angus Reid survey of soft PC voters reveals that Toronto Mayor John Tory, former MPP Christine Elliot, and current MPP candidate Caroline Mulroney are among the would be PC leaders Ontarians say would make them more likely to support the party.

John Tory has no intention of becoming a candidate, saying a number of times since Patrick Brown’s resignation, he’s running for re-election as Toronto’s mayor. Christine Elliot is now Ontario’s patient ombudsman and is said to be happy in the post, although she is said to be listening to those who are encouraging her to run. Caroline Mulroney is considering a run. There is also word that Federal Conservative MP Erin O’Toole is considering a run for the Ontario PC leadership.