After 54 years in front of the camera, beloved actor Morgan Freeman has taken one of the entertainment industry’s highest honors. 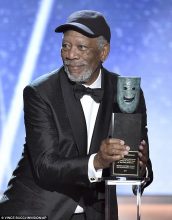 Accepting the Screen Actors Guild’s Life Achievement Award Sunday night, the 80 year old screen veteran thanked SAG-AFTRA and his family, and acknowledged how momentous this achievement was for him.

“These moments in life usually call for an entire litany of thank you’s. I can’t do that because I don’t know all of your names, so I won’t try,” said Freeman. “This is beyond honor. This is a place in history.”

The award was presented by Rita Moreno, whom Morgan presented this award to five years ago. “Morgan is way more than just an actor, narrator, producer, humanitarian. This man is a national treasure,” said Moreno.

“I wasn’t going to do this; I’m going to tell you what’s wrong with this statue,” he said. “It works from the back, but from the front, it’s gender specific. Maybe I started something.”

Freeman has long been a fixture on the SAG Awards scene. His first nomination (for The Shawshank Redemption) accompanied the guild’s inaugural awards ceremony in 1995, and he went on to receive three further nominations across his career: two for Million Dollar Baby (one as part of the ensemble on top of his victory in the best supporting actor category) and an additional one for his performance as Nelson Mandela in 2010’s Invictus.

Beyond SAG, Freeman’s work was also recognized by the Academy five times throughout his career. He received his first Oscar nomination in 1988 for Street Smart, and followed up with notices for Driving Miss Daisy, The Shawshank Redemption, and Invictus. His 2005 SAG victory for Million Dollar Baby foretold his first (and, to date, only) Oscar win for the same film.

Outside of his work in prestige pictures, Freeman has multiple commercial hits under his belt as well, including Christopher Nolan’s Dark Knight trilogy, global smash Now You See Me (and its successful sequel), and the Jack Nicholson collaboration The Bucket List.

Though his face is one of the most recognizable in Hollywood, Freeman’s voice added a new layer of appeal to his diverse career, narrating documentaries (March of the Penguins), fiction films (War of the Worlds), and television episodes (American Masters) over the years.

Backstage at the SAG Awards, Freeman reflected on how much being an actor has meant to him: “The film industry is my life. Show biz is my life. I hope it stays put and stays in shape,” he said. ” You have to give that some thought because the title is life achievement, the inference might be get off the stage, you’re done. It might. My hope is that’s not the case, that they were saying congratulations so far.”