IMMIGRATION TO U.S. TOUGHER FOR CANADIANS SINCE TRUMP: REPORT

It seems Canadians trying to move to the United States are regularly facing more paperwork, tougher scrutiny and longer wait times than they did before Donald Trump became president.

The Toronto Star is reporting that there is proof of this from both Canadian and American immigration lawyers, who say that Trump’s skepticism toward immigration of all kinds has produced a change in culture and policy within the bureaucracies that handle immigration cases.

The lawyers say this shift has hindered various kinds of Canadian applicants. They include skilled professionals being hired by U.S. firms, corporate managers transferring to their companies U.S. offices, people getting married to Americans and people already living in the U.S. and seeking a green card for permanent residency.

Meantime, Donald Trump is insisting he’s not a racist in the wake of crude remarks he is said to have made last week about Haiti and nations in Africa. 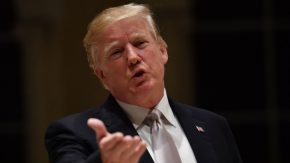 “No, I’m not a racist. I’m the least racist person you have ever interviewed,” Trump said Sunday evening as he arrived for dinner at one of his Florida golf clubs.

According to several accounts, Trump used the term “shitholes” to describe African countries during a bipartisan Oval Office meeting on immigration policy Thursday and said he’d prefer immigrants from countries like Norway.

Trump also denied making the statements attributed to him, but avoided getting into specifics.