With six months until the next provincial election, Patrick Brown and the Progressive Conservatives remain on track to form a majority government. 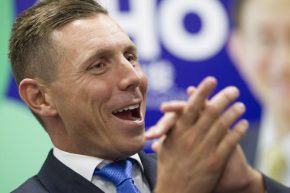 A new Forum Research poll shows the Ontario PC’s dropped 5 percent from October, but are still heading toward a massive majority.

Voters put the Tories at 40 percent, Andrea Horwath’s New Democrats at 26 percent and the governing Liberals at 24 percent.

Bozinoff also says the Liberals are down pretty much to their base, regardless of popular moves like a $15 an hour minimum wage and a 25 percent cut to hydro bills.

As for Premier Kathleen Wynne, her approval rating is at a dismal 15 percent, compared with 74 percent who say she’s doing a bad job, while 10 percent had no opinion.