Talk about a Canadian comeback! 52 year old Shania Twain was the half time show headliner at last night’s Grey Cup in the nation’s capital. 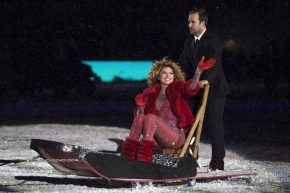 After arriving by dogsled and accompanied on stage by a Mountie, Shania performed a new song from her just released album Now, and two classic hits, That Don’t Impress Me Much and Man, I feel Like a Woman!

It’s been a long road back for the country pop music superstar, who has suffered with lyme disease, a tick-borne bacteria that leads to flu like symptoms and can spread within the body.

For Shania, it was a 15-year illness that resulted in dysphonia, a vocal cord disorder that eventually left her unable to sing for a while and forced her to undergo extensive speech therapy and vocal training.

Soon after that she disappeared from the limelight in 2003, blaming her crushing marriage woes to Robert Lange – who she shares son Eja, 15, with – as the reason why, and most recently her battle with Lyme disease. It’s been widely reported that Lange was cheating on her with her best friend. Shania did find love again in Frederic Thiebaud, the ex-husband of the friend who had an affair with Lange.

At the Grey Cup half time, Shania also performed her confessional new single Life’s About to Get Good, which is on the charts.