It’ll be two weeks this Sunday November 26th since the King Street Pilot Project began, and it appears to be a success so far in cutting travel times for TTC riders. 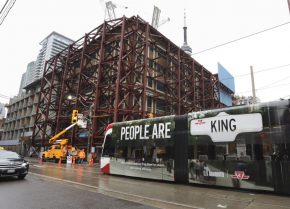 Researchers at the University of Toronto have analyzed the travel times for streetcars and blue night buses between Jarvis and Bathurst. They found it’s taking just under 14 minutes on average for eastbound riders to travel this distance, compared with just over 16 minutes before the pilot was implemented.

And traveling westbound, the average travel time is down from 18 minutes before the King Street pilot project, to just under 15 minutes now.

There is no parking on King Street between Bathurst and Jarvis during the pilot project, and vehicles are forced to turn right at every major intersection.

But King streetcar riders are complaining, there still aren’t enough cars in service WEST of Bathurst. Mayor John Tory says this is a result of growing pains.

“The crowding of the streetcars is in some respects the consequence of the fact that we think from what we’re hearing that more people are prepared to try transit again because they hear the streetcars are moving faster and this has made the streetcars more crowded,” Mayor Tory explained.

Word from the TTC, is that the King Street route is already pushed to the limit with an additional seven streetcars already added, and the extra congestion is part due to the delayed delivery from Bombardier on the new streetcars.