MOOSE ON THE LOOSE IN MARKHAM MAYBE TAKING A SNOOZE

A moose sighting in the north is common, but in the northern part of the GTA – not so much.
A moose has been on the loose in Markham all day. 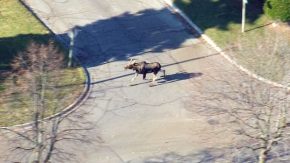 (CTV News)
At one point this morning, it ran onto a runway at Buttonville Airport and since has roamed through residential neighbourhoods and even across roads, like Woodbine Avenue, narrowly missing a couple of vehicles that slammed on the brakes.
The moose is believed to be resting now in the Kennedy Road 16th Avenue area.

Ministry of Natural Resources officials have left the scene as it’s too dangerous to try to tranquilize it in the dark.

The OPP and York Regional police have officers in the area, monitoring the situation.

MNR’s Emily Funnell explains the sooner it’s captured the better for all.

”When they (moose) run and they’re under that amount of stress … it can actually cause them to die … we really want to make sure that we give it as much space as possible so that it doesn’t continue to feel that need to run.”

The hope is the moose will either find its own way north of the GTA or be sedated and transported there.