An “improvised explosive device” was detonated on a Tube train in south-west London this morning in what police are calling a terrorist incident.

Twenty-two people are in hospital, mostly with burn injuries. None is said to be life threatening. 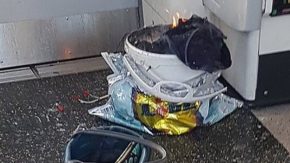 Online pictures show a white bucket on fire inside a supermarket bag, but do not appear to show extensive damage to the inside of the train.

British Prime Minister Theresa May has tweeted, “my thoughts are with those injured at Parsons Green and emergency services who are responding bravely to this terrorist incident.”

London Mayor Sadiq Khan has appealed for calm, saying the city “will never be intimidated or defeated by terrorism”.