Air Transat and WestJet planes are now en route to the Dominican Republic and Turks and Caicos to pick up Canadian vacationers and bring them home ahead of Hurricane Irma’s arrival. 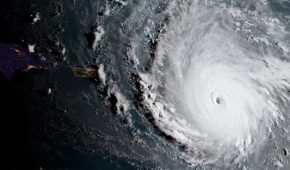 Hurricane Irma, a record-breaking Category 5 storm, is expected to leave a trail of destruction across the eastern Caribbean. (NOAA/NWS/NHC/Reuters)

Now a category five storm and the most powerful Atlantic hurricane in recorded history, Irma has already made landfall in the northeast Caribbean islands. The eye of hurricane Irma passed over Barbuda at 1:47am Eastern Time on Wednesday.

Forecasters at the U.S. National Hurricane Centre say Irma has sustained winds near 295 kilometres an hour and is heading west northwest on a path toward Puerto Rico, the Dominican Republic, Haiti and Cuba before possible heading for Florida over the weekend.

Authorities in the Florida Keys are expected to announce mandatory evacuations for visitors today and for residents starting tomorrow.