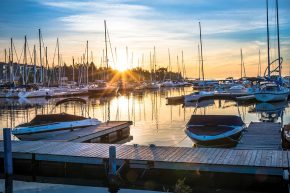 The company that owns Zoomer Radio and The New Classical FM has acquired a controlling interest in On the Bay magazine for $643,000 cash.

On The Bay is a regional lifestyle magazine published quarterly for the 20 towns and villages of Southern Georgian Bay.  It’ is the preeminent magazine publication in the region with 50,000 readers and 300 advertisers, and has become an authoritative media voice in the area.

“On The Bay and ZoomerMedia’s New Classical 102.9 FM in Collingwood will strengthen each other’s respective operations in the marketplace for readers, listeners and advertisers,” said ZoomerMedia Founder and CEO Moses Znaimer.

Jeff Shearer, Founder of On The Bay, will continue as Publisher of the magazine in addition to assuming duties as General Manager of The New Classical 102.9FM. “I’m truly excited by the potential synergies between our two like-minded quality-driven local voices to not only work well together but to grow both in audiences and advertising support as they become an even stronger media force in Southern Georgian Bay,” stated Mr. Shearer.