The strike by ground crew workers at Toronto’s Pearson International Airport continues. The workers, employed by Swissport, have rejected their latest contract offer by a 98 percent margin. 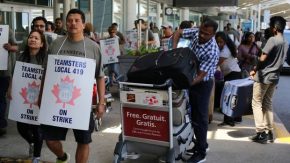 A spokesman for Teamsters Union Local 419 says Swissport’s second offer was almost identical to it’s first and has failed to address issues around shifts and benefits. A company spokesperson had said prior to the vote, they were optimistic workers would accept the deal.