The lights of the TORONTO sign in Nathan Phillips Square were lit up in red and yellow overnight to honour the victims of the terror attacks in Spain. 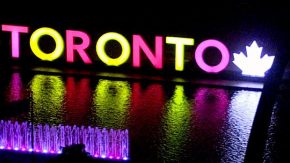 The terror began in Barcelona, when a van attack killed 13 people and injured 100.

Later, five civilians and a police officer were injured in another vehicle terror attack in the seaside town of Cambrils which investigators say was linked to the Barcelona attack. One of those injured has since died.

The five suspects in Cambrils wearing fake bomb belts were shot and killed by police. The driver of the van in Barcelona fled on foot and remains at large in the latest rampage claimed by the Islamic State Terror Group.

Investigators say many of the dead and injured in Barcelona are tourists. None are believed to be Canadians.

Trudeau, who is on a family vacation in B.C. this week, says in a statement that he is deeply saddened by the terrorist attacks in Spain.

The prime minister says Canada grieves with Spain, and will continue working with the international community “to fight terrorism and build a world where we can all feel safe and secure.”