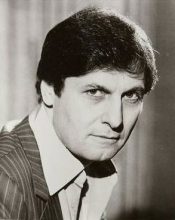 His manager Matt Sherman says Bologna died on Sunday in the Los Angeles area after a three year battle against pancreatic cancer at the age of 82.

The actor and director was married to actress Renee Taylor, who credited his doctors for prolonging his life so he could receive a lifetime achievement award from the Actors’ Fund of America this past February.

Bologna was nominated for an Oscar in 1971 for best adapted screenplay for the movie Lovers and Other Strangers.

He had a string of television appearances, but he was best known for the 1982 comedy My Favorite Year.