Canada’s Denis Shapovalov is making sports headlines around the world, after doing the unimaginable. 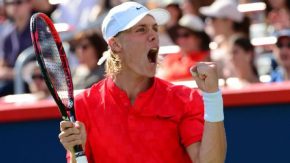 The 18 year old from Richmond Hill took out number 1 seed and tennis legend Rafael Nadal at the Rogers Cup in Montreal Thursday night.

“Honestly, I was thinking all day there’s no chance, I’ll go and have fun, but I’m not beating this guy,” Shapovalov said after the match,”But then I went up a break in the second set early and even though he broke me back I felt like I’m capable of breaking him, I’m capable, I’ll maybe have a chance to do some damage, so when I won that second set, I though, ok, come on let’s go, one more set, and who knows, anything can happen.”

Shapovalov has taken major strides this week to reach his goal of cracking the world’s top 100 with wins over Rogerio Dutra Silva and 2009 U.S. Open champion Juan Martin del Potro. And by beating Nadal, he also stopped the Spaniard’s bid to regain the number one ranking, which Nadal could’ve achieved by reaching the semifinals.

“He won and it’s amazing for him,” Nadal said graciously in defeat,”and well done for him, it’s a great story and I am not happy to be part of this story, that’s it.”