On the front page of today’s Globe and Mail there’s a profile of Julius Kuhl – who lived for decades in Toronto in relative anonimity – but is described as “a hero of the holocaust” who saved hundreds and maybe thousands of lives of his fellow Jews.

Kuhl ran a construction company and died in 1985 – but according to documents stored in Switzerland, Jerusalem and Washington – Kuhl’s role as a saviour comes to light.

Kuhl was a low-level diplomat at the Polish legation in Bern, Switzerland – but in 1941 he was also the centre of a network that manufactured fake Latin-American passorts – that were smuggled into nazi-occupied Europe.
Then he and a colleague entered the names and birthdates of european Jews – before pasting in their photos. 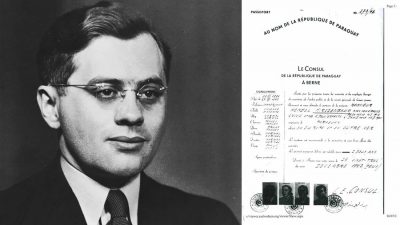 The output of life-saving passports continued for two years – and Kuhl is being described as being as effective as Oskar Schindler – who protected more than 1,000 Jews – by employing them in his factory.