After a Republican promise for more than seven years to repeal Obamacare, the issue comes to a critical vote today in the U.S. Senate. 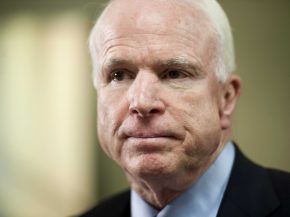 John McCain’s attendance for the vote is an indication of just how close the vote may be.

“Senator McCain, 80 years old, a little more than a week after blood clot surgery, diagnosed with aggressive brain cancer will be back in Washington,” says his office.

The Arizona Republican has indicated he would vote yes in a motion to proceed for debate and amendments.

McCain campaigned heavily on the Affordable Care Act repeal issue last year when he won a sixth Senate term but has expressed concerns about the legislation in its current form.

His vote could be seen as revenge against Obama who beat McCain for the presidency in 2008.

President Trump has been tweeting up a storm this morning, including 3 that mention today’s vote.

One reads: So great that John McCain is coming back to vote. Brave – American hero! Thank you John.

It’s worth noting that Trump has insisted numerous times in the past that McCain is not a war hero, despite being captured in Vietnam and tortured as a prisoner of war.