Two hundred years after Jane Austen died, a new ten-pound note featuring an image of one of England’s most revered authors has been unveiled. 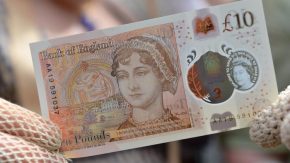 Austen’s novels include Pride and Prejudice, Emma and Sense and Sensibility; all brought to life in recent decades on the big screen.

Jane Austen is considered one of the most perceptive chroniclers of English country life in the Georgian era.

The new note, known as the “tenner” is due to go into circulation on September 14th and is the Bank of England’s latest effort to make its notes more security by using plastic, not paper. It’s printed on polymer, just like the recently relaunched five pound note which features Winston Churchill.