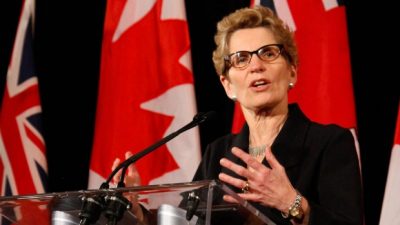 Ontario Premier Kathleen Wynne says her journey to the annual state-governors’ conference in Rhode Island – has given her an opportunity to speak with more than 20 U-S governors.

And Wynne says she’s relieved to know that Canada has allies at the state level – if there’s a threat to cancel NAFTA.

She also says she’s confident that the governors will work hard – to make sure that doesn’t happen.

Premier Wynne is part of the Canadian delegation to the three-day meeting of the National Governors Association.

Wynne has also been lobbying U-S governors for months – as she tries to make allies on trade issues.