A pro-democracy dissident, who won the Nobel Peace Prize in 2010 has died from cancer while serving an 11 year prison sentence in China. 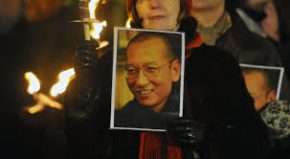 Liu Xiaobo was  a prolific essayist and literary critic who survived the Tienanmen Square massacre.  He was also China’s most prominent political prisoner.
He was awarded the Nobel Prize while imprisoned for inciting subversion.  His widow remains under house arrest.

China’s Foreign Ministry in Beijing issued a statement Friday morning, saying China made all-out efforts to treat Liu after he was diagnosed with liver cancer.  Several western nations had urged for his release to he could be treated abroad.

China rebuffed those calls saying he was already getting the best care possible.