A lawyer for the widow of an American soldier killed in Afghanistan is scheduled to face off in an Ontario Superior court here in Toronto today against counsel for Omar Khadr, who admitted to killing Sgt Christopher Speer in 2002, but then later recanted. 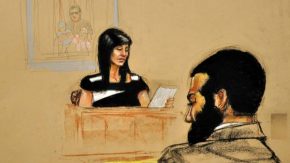 Tabitha Speer along with former U.S. soldier Layne Morris are trying to go after Khadr’s assets, hoping to have the Canadian court enforce a $134-million U.S. award against Khadr from a Utah court two years ago.

They want an injunction aimed at preserving the $10.5-million compensation the Canadian government is paying to Khadr for violating his human rights while a prisoner at Guantanamo Bay military prison.

Howard Anglin was the deputy chief of staff to former Prime Minister Stephen Harper. He told Zoomer Radio’s Fight Back with Libby Znaimer, in principle, the Utah court order can be enforced in Canada in order to freeze those assets wherever they are no matter who’s holding them.

“It’s actually against the law to move assets around or to give away assets deliberately to avoid a creditor and in this case, which would include a judgement like this that somebody’s trying to enforce,” Anglin went on to explain.

In response, a lawyer for Khadr argues the injunction application should be rejected, saying it’s unlikely a Canadian court would enforce the Utah award and that Khadr has a right to keep his financial affairs private.