There’s a baby boom in Toronto’s downtown core as young families buy up condos along the waterfront.

A new analysis of 2016 census data shows the city’s downtown core is experiencing a baby boom and is now home to thousands of children under the age of 5. 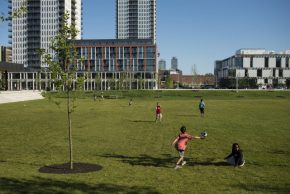 In fact, in the neighbourhood that runs across the bottom of the city from Bathurst Street to the Don River, the number of kids under five has almost tripled to 2120 in the last 10 years.

Nearby in the Niagara neighbourhood, which includes condo towers around Fort York and part of Liberty Village, the number of young children has more than doubled.

And along the Bay Street corridor south of Bloor to Front, the number of pre-schoolers has jumped by nearly 90 percent.

The census data explains the demand by parents for licensed child care downtown and a push for more parks, recreation and open space. City parks and recreation staff are responding by releasing a new master plan in the fall for downtown and planning staff are conducting a feasibility study for Rail Deck Park, the downtown rail corridor between Bathurst and Blue Jays Way.