For the first time, a TTC vehicle operator has tested positive in the transit agency’s new random drug and alcohol testing policy. 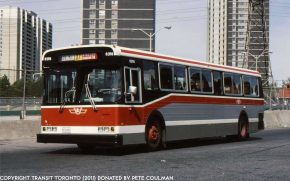 TTC spokesperson Brad Ross confirms the operator was tested for drug use during a shift Saturday, and the test, which takes a few days to process, came back positive on Wednesday. But Ross cautions riders to keep the results in perspective.

“We have 10,000 people who are deemed to be in safety sensitive positions, and each of those positions is an important one with respect to safety,” Ross explained, “I certainly understand, and the TTC understands perception of an operator being impaired. It is a very serious offense, but it is just as important for maintenance people who are doing the brakes for example, on a buss, to be fit for duty.”

Ross says because of agency policy, he cannot disclose the substance the employee tested positive for, or say specifically what type of vehicle the individual was operating. The driver has been suspended pending the outcome of a disciplinary meeting with a supervisor.

The random testing policy went into effect on May 8th. Since then, there have been 8 positive tests, two for alcohol and six for drugs. More than 300 employees have been tested so far.