A 49 year old Montreal man, accused in a vicious terror strike at the Flint, Michigan airport, is said to have cited conflicts in the Middle East and Afghanistan as justification for his actions. 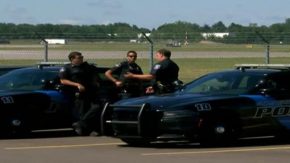 Amor Ftouhi has been charged with committing violence at an airport and will be held in custody until a bond hearing scheduled for next Wednesday.

“Based on the information we have presently, we don’t believe that anyone was involved with this individual. We have no information to suggest a wider plot,” Gelios explained to reporters.

Gelios also detailed that during the stabbing, the suspect yelled “God is great” in Arabic and said something to the effect of “you have killed people in Syria, Iraq and Afghanistan and we are all going to die”. The officer is expected to recover from his injuries.

According to the FBI, Ftouhi entered the U.S. from the Lac-Champlain border crossing south of Montreal on June 16th and spent five days in the U.S. before heading to Bishop International Airport in Flint Wednesday morning.

Police in Montreal say they are working with both the RCMP and the FBI in searching an apartment in the city’s east end.