It appears we may be overdoing it when it comes to vitamin D supplements, and researchers say that can lead to bone fractures, kidney stones and even an increased risk of certain cancers. 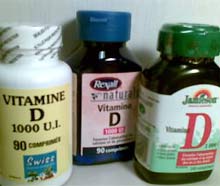 Scientists at the University of Minnesota led a team that looked at trends in the use of vitamin-D supplements, using data from 1999 through 2014.

You can read about the study in the Journal of the American Medical Association.