It was an emotional day for Torontonians of Ukrainian heritage on Sunday afternoon. A groundbreaking ceremony was held just outside the Princes’ Gates on the exhibition grounds, for a memorial to be built in honour of the victims of the Ukrainian genocide of 1932-33, known as the Holodomor. 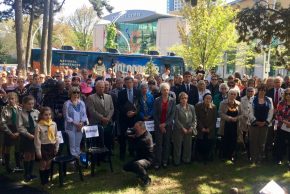 Mayor John Tory was there and spoke about the importance of the sculpture.

“I think it’s important for the Ukrainian community which is large and contributing in Toronto, but it’s also an important part of our shared history because we have so many people here from around the world. And it’s important if we’re going to be the most inclusive city in the world we need to understand each other’s tragedies and things that have happened in communities here and in the past in other countries, so this is a place where people can come and reflect on that from across the city,” said Mayor Tory. 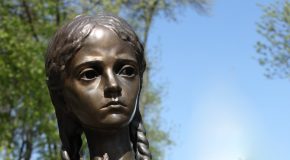 The Holodomor Memorial will be centered around the iconic sculpture Bitter Memories of Childhood by Ukrainian artist Petro Drozdowsky. Pathways leading from three different entry points along Strachan Avenue will draw people in to learn more about the Holodomor, a famine orchestrated by the Stalinist Regime which led to the deaths of millions of Ukrainians. It’s hoped the memorial will be unveiled in May of 2018.

Click here for more information on the Holodomor Memorial.