A new federal Conservative party leader will be named this weekend, after the 13 candidates make their final pitches to party faithful today. 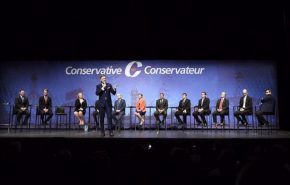 None of the 13 is expected to win on the first ballot, which means there will be several rounds of counting before the winner is finally announced tomorrow night at the Toronto Congress Centre.

Most party members have already voted by mail-in ballots, although they can still cast ballots in person and at polling stations across the country before the polls close at 4 pm tomorrow.

“There’s (sic) 13 candidates and you’re going to rank who’s your first choice, your second choice, your third choice, and as they go through, they’ll drop people off,” explained strategist Mike Van Soelen to Zoomer Radio’s Fight Back with Libby Znaimer, “So it may well be that the consensus number two or number three choice on most people’s ballots, carries the day.”

A number of candidates have championed policies during the campaign that run contrary to long-standing party policy and, should one of them win, it might be difficult, or at least time consuming, to persuade party members to change direction.

Front-runner Maxime Bernier for instance, has campaigned on a pledge to undo support for supply management, the policy that controls the production and price of dairy products in Canada.