At one point this morning it was a six alarm fire sending smoke from Cherry Street at Polson Pier, north to Eglinton and west to the 427. 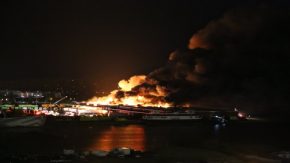 The fire has since been knocked back as firefighters gain the upper hand on the blaze that broke out at GFL Recycling Plant at 1 o’clock this morning.

The fire initially spread quickly, causing part of the roof to collapse.

All through the morning, Toronto Fire Chief Matthew Pegg reassured city residents that the smoke was not hazardous. A team from the Ministry of the Environment arrived during the morning to ensure the air was safe to breathe.

The Mackenzie fire boat was being used as a giant fire hydrant to send tens of thousands of litres of water from Lake Ontario to the scene of the fire.

Toronto Mayor John Tory dropped by to thank firefighters for their efforts during tough conditions in heavy rain. Chief Pegg said the rain helped the fight in the early going.