The iconic Honest Ed’s sign at Bloor and Bathurst is coming down today. 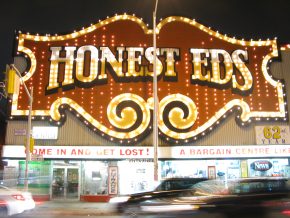 A crane will remove the 23-thousand-bulb exterior sign from the shuttered bargain store starting at around 11 o’clock this morning. Zoomer Radio’s Michael Kramer will be there to witness the historic event and will bring us a feature report later today.

Theatre producer David Mirvish, the son of the late Ed Mirvish, says the sign will be taken to storage where it will be refurbished and later displayed at the Ed Mirvish Theatre on Victoria Street.

Ed Mirvish opened the store in 1948 and was known for his Christmas turkey giveaways and lavish street parties.

The store closed on December 31st. The site is being re-developed with residential towers, retail stores and a public market.