ROWLING MAKES APPEAL TO THE PUBLIC OVER STOLEN BOOK

J.K. Rowling is urging Harry Potter fans not to buy a handwritten prequel to the boy wizard’s adventures – that was stolen during a burglary in England. 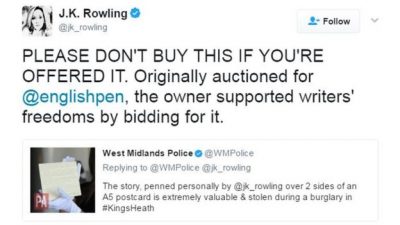 Police say it was stolen, along with some jewelry, during a burglary in Birmingham, central England -between April 13 and 24.

Rowling tweeted a picture of the manuscript Friday with the message; “PLEASE DON’T BUY THIS IF YOU’RE OFFERED IT.”

The story is set three years before Harry is born – and tells how the boy wizard’s father James Potter and godfather Sirius Black – get into trouble with a policeman -before escaping with the aid of magic.