Ontario’s doctors have chosen as their new leaders a pair of outspoken critics of the governing Liberals at Queen’s Park. 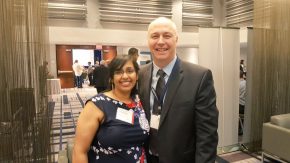 They have also selected Doctor Nadia Alam as president-elect, meaning she will be in charge next year when Ontarians head to the polls. Doctor Alam has also been a frequent guest on Zoomer Radio’s Fight Back with Libby Znaimer.

Both Whatley and Alam say they will endorse job action if the Wynne Liberals fail to grant their profession binding arbitration.

The OMA represents more than 40,000 doctors and has had a tumultuous year marred by infighting and the mass resignation in February of its entire executive. Zoomer Radio/Classical FM News sources say Premier Kathleen Wynne has told her Health Minister Dr. Eric Hoskins to get a deal for the doctors well in advance of next year’s election.