The Environment Canada rainfall warning continues across much of southern Ontario, including the GTA.

The system is stalling over the Great Lakes, so as a result, forecasters are saying some areas could receive up to 90mm of rain through tomorrow.

Because the ground is already saturated in many areas, further rainfall cannot be absorbed and that’s prompting flooding concerns.

Depending on conditions, a release from the City of Toronto says the Don Valley Parkway may close south of Don Mills, as of 3 Friday afternoon due to anticipated flooding. 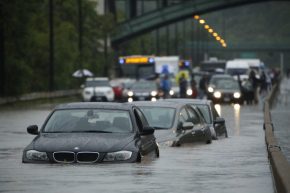 Experts are trying to avoid the situation that happened in July of 2013 when cars on the DVP were partially submerged in water because of flooding.

Go Trains travel through the Don Valley on the Richmond Hill line, so there may be some schedule changes.

Provisions are also in place to help residents of Toronto Island, where there is already some localized flooding. Ferry service to and from Toronto Island is restricted to residents, staff and emergency personnel only.

Current water levels in the storm sewer under the Lower Simcoe underpass are above the usual catch basin threshold, which has resulted in ponding on the road. Toronto Water has implemented a temporary repair, but temporary flooding could occur.

Delays and some cancellations are anticipated at both Toronto’s Pearson and Billy Bishop Airports.